Rock cut caves conjure up images of shelters amidst huge piles of rocks. Early humans sought caverns and natural hollows in hills for protection from the elements and beasts. While seeking refuge in these natural enclaves they explored its dark interiors and began by first embellishing its walls with paintings and then as they developed tools they hewed its surfaces to adorn them with sculptures documenting their life and beliefs. The dark interiors of the cave resembled the womb evoking feelings of both protection and spirituality. Innumerable rock-cut shelters have been built all across the Indian sub continent and rock-cut architecture in India has a great amount of diversity than any other form of rock-cut architecture around the world. 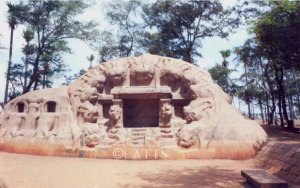 A fascinating group of rock-cut structures stands amidst the sandy beaches at Saluvankuppam, five kilometres north of Mahabalipuram popularly referred to as the Tiger caves. As one moves along the East Coast road a small signage marks the presence of the caves. The name itself conjures up images of a tiger’s den, but it is far from it. This group of rock-cut structures gets its name from a rock-cut cavern with eleven ferocious tiger heads hewn out of the hard surface of the granite forming the mouth of the cave. In the centre is the façade of a small temple. The Tiger Cave is considered to be one of the Mahabalipuram rock-cut temples constructed by the Pallavas in the 8th century AD. This amazing mandapa contains a shrine that is dedicated to goddess Durga. To the south of the tiger cave is another rock-cut cave temple with a Shiva Linga and a Nandi. This temple at present is located below the general ground level such that the top of the rock that forms the roof of the temple is accessible. A series of rock-cut steps leads to the entrance of the temple. One of the rock-cut wall of the temple has an inscription as well. The discovery of another inscription on a rocky outcrop in the complex in 2005 led to the excavation of a Sangam period SubrahmanyaTemple close by. 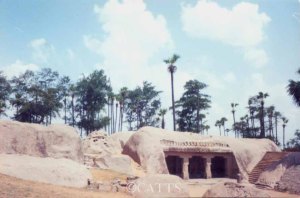 Amongst the numerous other rocks dotting the sandy surface of the beach is a huge rock oddly jutting out of the ground. Rectangular incisions on its surface are reminiscence of the traditional technique of driving wooden wedges in the rock surface for splitting them, highlighting the ingenuity of the craftsmen who built these rock-cut structures.

The Tiger cave complex situated close to the shoreline makes for an interesting exercise, unraveling stories from a bygone era and exploring the serene surroundings of the beach in the Bay of Bengal.

Disclaimer: The article expresses individual views of the author. The rights to the content of the article rests with the author.

What do you think? Cancel reply

Ownership of copyright to text, image and video in a contribution rests with the author.

© Unauthorized use and/or duplication of this material without express and written permission from the administrator of the site is strictly prohibited. Excerpts and links may be used, provided that full and clear credit is given to India Heritage Hub with appropriate and specific direction to the original content.