Wondering what is the connection between Kabir Chaura, Sant Kabir Dasji and Banaras gharana. On the face of it to an outsider, someone from outside the cultural environment of Banaras, the trio would seem to bear not too great a connection. But Banaras never fails to surprise, its narrow alleys conceal more than they reveal. Behind the monumental façade of its ghats, the vedic chanting of slokas in its many temples and shrines, is a living and thriving city that for several thousand years has sustained a unique cultural environment through its many inhabitants who are part of the great drama of life and death, pleasure and penance, simplicity and complexity, unfolding every minute in the city. Many of the inhabitants of the city who have come to represent the true essence of Banaras came as visitors and seekers but could never leave the city again. So is the relationship between Kabir Chaura, Kabirdasji and the musicians of the Banaras gharana –  transcendental through time and spirituality.

Kabir Chaura mohalla in Banaras is an essential component of the city’s living cultural heritage. It has strong associations with Kabirdasji as the name itself suggests. Kabirdasji is said to have been born in A. D. 1398 and found near a tank called Lahartara in Banaras by a childless couple Niru and Neema who were Muslim weavers. It is believed that Niru-Nima who brought up Kabirdasji lived in this mohalla and it was here that Kabirdasji grew up and started preaching. The Kabri Chaura math situated in the heart of the mohalla is so called because, according to tradition, Kabirdasji preached from the site where the math is located sitting on a chaura or platform. Kabirdasji himself did not deliberately organize a sect, though he doubtless made disciples amongst the many who were attracted to his teaching. Kabir Chaura math is said to have been established by Kabirdasji’s first follower, Acharya Surti Gopal in A.D.1578.  The charana paduka of Kabirdasji are kept in the math. Located in the heart of the mohalla the math appears to have been the generator and the source of the name of the mohalla as well.  Kabir Panthi’s have been living in this math since the 16th century. The Kabir Chaura mohalla has therefore a touch of sacredness and a tranquil environment and has sustained Kabirdasjis philosophy.

After visiting the math, moving through the lanes of the mohalla you are compelled to feel the presence of the great Saint moving through its lanes and his dohas unconsciously start playing on your lips . . . 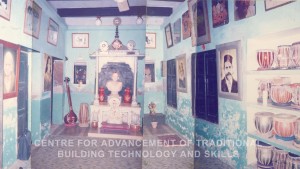 A Musician’s House in the mohalla

Lost in the dohas of Kabir Dasji as one moves through the by lanes of the mohalla attention is suddenly drawn to the strumming of the tanpura, the musical strains emanating from a harmonium and the rhythmic playing of the tabla accompanied by the sweet rendition of Indian classical ragas. This is the world of the famous musicians of Banaras. Apart from the association with Kabirdasji, Kabir Chaura mohalla also has strong associations with Indian Classical Music and the Banaras gharana and has been traditionally a musician’s mohalla. The classical musicians of the “Banaras Gharana” belonging to the Kathak Community have been living in the mohalla since the early 18th century.

As compared to other gharanas of classical music in North India, the musicians of Banaras have excelled in all areas of music.  Nowhere else in India has music been studied and performed with greater skill and in greater variety and Kabir Chaura is one of the very few centres not only in Banaras but elsewhere in India where musician’s families still live as a close community. Kabir Chaura mohalla has been the indisputable center of world famous musicians in Banaras.  More than two-thirds of the musicians of Banaras stayed in the mohalla.  Every musician family of the mohalla is related to a famous musician. Anokhelal Mishra, Bade Ramdas Mishra, Bihari Mishra, Chote Ramdas Mishra, Gopal Mishra, Gopi Krishan, Gudai Maharaj, Mithailal Mishra, Shitala Mishra, Pandit Ramsahya, Pandit Shri Kanthe Maharaj, Pratap Maharaj, Pandit Kishan Maharaj, Sidheshwari Devi, Sitara Devi all belong to Kabir Chaura. The list goes on . . .

To quote in the words of Susheela Misra from Some Immortals of Hindustani Music . . .

The Kabir Chaura Mohalla of Varanasi is like a small musical township because here are located the residences of many celebrated musicians who have kept up the musical sanctity and traditions of this ancient and sacred “eternal” city.  Musical and magical notes from assiduously trained male and female voices, from sahnais and sarangis and sonorous bols and parans from tabla bayans have kept the very air of the mohalla musically surcharged. 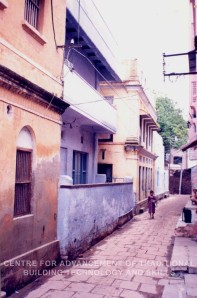 Narrow galies of the mohalla

The Kathak community of musicians living in Kabir Chaura and elsewhere in Banaras have an interesting history. “Kathaks” were a caste of professional performers, specializing in the Kathak form of dancing, training gayikas and practicing instrumental music. They migrated from the Rajputana region a fact not known to many people. The word “Kathak” (reciter of stories) derived from the Sanskrit word Katha meaning story.  Originally a Kathak was one who recited puranic stories accompanied by appropriate bodily movement, facial expression and gesture of the hands, fingers and eyes.

Thus the main stream of Indian classical music developed from Rajasthan and one stream of the Kathaks went to Delhi and Punjab and the other went to Lucknow.  The Kathaks of Banaras belong to the Lucknow branch. Banaras being a cultural center attracted several musicians in the early colonial period when patronage declined and musicians migrated to regional courts. Traditionally they settled at Telia Bagh, Dal Mandi, Piyari, Chahmama, Ramapura, Ramnagar and Kabir Chaura, out of which Kabir Chaura had the largest concentration of Kathak families.  Today in Banaras, Kabir Chaura is the only mohalla where musicians still live as a community. 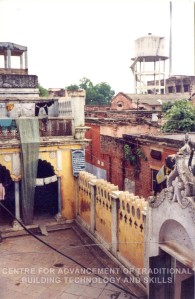 Traditional house in the mohalla

The philosophy of Kabir Dasji and the presence of the Kabir Chaura math nurtured and gave impetus to the rich musical tradition of Kabir Chaura mohalla. The residents especially the Kabir panthi’s and the musicians consider the mohalla a sacred place. Many residents of the mohalla do not wish to move away from the place. Besides the Kabir Panthis and the musicians two others communities of Kayasthas and Yadavs coexisted in the mohalla creating a harmonious social fabric. 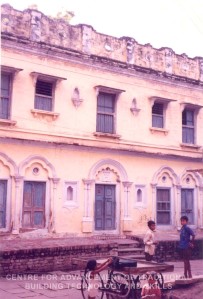 Traditional house in the mohalla

The physical fabric of Kabir Chaura mohalla also played a significant role in nurturing the musical traditions. The spaces within the mohalla not only supported the practice of music but also facilitated performance of the musical traditions fostering a close interaction of the musicians and the residents on a daily basis. Spaces were used for organizing public and cultural activities around specific landmarks and nodes within the mohalla. Kabir Chaura math acted as a community space and provided for congregation of people at special occasions. Music performances were a part of annual celebrations in the neighbourhood. Music programs were also organised at special occasions at religious shrines within the mohalla. Gulab Bari festival was organised in the open-air theatre in the mohalla. Baghs and bageechis, the summer resorts of the rich acted as pleasure gardens with spaces for private and also public recreational activities at times. Music performances were held in baradaris and on open platform within these gardens sometimes privately sometimes as public functions.  All these activities contributed to the interaction of the musician with the residents. The small scale cultural activities within the mohalla complemented the larger cultural traditions of Banaras. 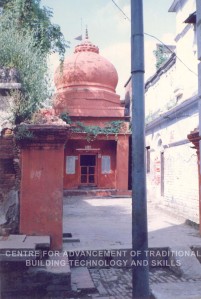 A shrine in the mohalla

However with changing times the cultural environment of Kabir Chaura mohalla has transformed greatly. Un-thoughtful interventions within the physical, social and cultural fabric of mohallas as well as at the city level have disturbed the delicate equilibrium which sustained the living cultural heritage of Banaras.

This is true for numerous other traditional neighbourhoods in different parts of India. Communities are now no longer the regenerating force within traditional neighbourhoods. The crucial linkages within cultural heritage, both tangible and intangible have degenerated to an extent that it is very difficult to visualize today how the two complemented each other and acted as the raison d’être for each others existence.

In present times we are not rooted to our context, quite often we live in completely contrasting environments different from the one that we had grown in and which shaped the formative years of our lives. We are not able to relate to the context in which we are living and we are not even aware of the culture existing around us in our neighborhood. With a constant and compelling urge to move away to bigger cities and shun all that is traditional, living cultural traditions and the spaces associated  with them are left to decay.  Conserving cultural heritage in this scenario is a challenging task, apart from saving mere physical manifestations of our cultural heritage, new means and mechanisms for conserving the essence of our living cultural heritage need to be explored so that we can experience it in its true sense and spirit.

Disclaimer: The article expresses individual views of the author. The rights to the content of the article rests with the author.

One response to “KABIR CHAURA KABIR DASJI & THE BANARAS GHARANA . . .”

What do you think? Cancel reply

Ownership of copyright to text, image and video in a contribution rests with the author.

© Unauthorized use and/or duplication of this material without express and written permission from the administrator of the site is strictly prohibited. Excerpts and links may be used, provided that full and clear credit is given to India Heritage Hub with appropriate and specific direction to the original content.